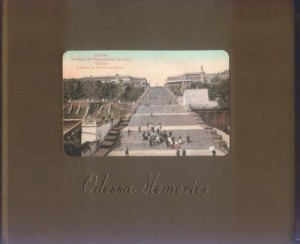 Published by: University of Washington Press

Odessa, the city founded by Catherine the Great in 1794 on the Black Sea, became a thriving international crossroads less than a century after its creation. This virtual ‘melting pot of Russia’ – the gateway to Russia from Constantinople, Athens, Venice, Marseilles, and Genoa, and the third largest metropolis in the country – quickly rose to prominence as a European cultural capital and a vibrant centre of Jewish culture. Odessa in its prime shared with St. Petersburg the distinction of being one of the few places in Russia where international ideas and commerce could flourish. In this album of pre-1917 Odessa, Nicolas Iljine has assembled a wealth of old postcards, rare photographs and illustrations from private archives, colourful posters and advertisements, and materials from the Russian National Library that have never before been published, to recapture a lost time in the life of one of the world’s great romantic cities. Historian Patricia Herlihy’s essay paints textured historical tableaux of Odessa’s nightlife and resorts, its theatres and criminal underworld, its schools and industries, and, not least of all, the synagogues, philanthropic societies, and organizations for defence against pogroms that were such a large part of Jewish life in old Odessa. Her portrait brings to life the city as experienced by such luminaries as Isaac Babel, Sholem Aleichem, and Vladimir Jabotinski. Both a visual treat and a serious exploration of Odessa’s rich history, culture, and social fabric, this book stands alone as a sumptuous homage to a storied city that has inspired affinity and curiosity all over the world. Nicolas Iljine, European representative for the Solomon Guggenheim Foundation, has over 30 years experience in cultural exchange with Russia. Patricia Herlihy is research professor at the Watson Institute for International Studies, Brown University, and professor emeritus of history, Brown University. She is the author of “Odessa: A History, 1774-1914” in English and Ukrainian.

To view the book download by clicking here (71MB)