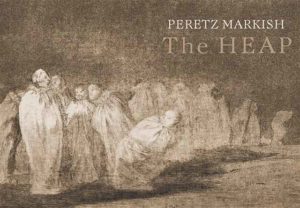 The Heap – Poem by Peretz Markish

Peretz Markish (1895-1952) was a brilliant poet and playwright , used the Yiddish language.

During the civil war in 1918 & 1919 white army soldiers retreating to the south and red army soldiers as well as some Ukrainian nationlists murdered over 100.000 Jews .Markish wrote a dramatic epos „Die Kupe“  in 1920 describing the horrors of these pogroms. I arranged for the first english translation and in 2015, commemorating the poet’s 120th. anniversary, we had the book presentation and discussion at YIVO in New York. In spite of Markish being an ardent communist and a leading member of the Jewish Anti Fascist Committee, Stalin ordered his arrest, together with 12 other Jewish poets, and had them all executed in Autumn of 1952.

To view the book download by clicking here (5MB)