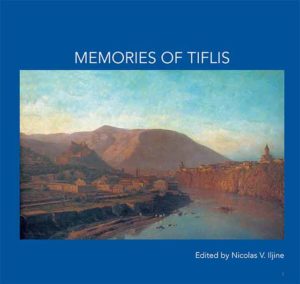 Tbilisi has been an important cultural, political and economic center of the Caucasus and served, with intermissions, as the capital of various Georgian kingdoms and republics. Under the Russian rule, from 1801 to 1917 it was called Tiflis and held the seat of the Imperial Viceroy governing both sides of the entire Caucasus.Focusing on the pre Soviet period Nicolas V.Iljine has assembled a prominent group of authors who focus on the history and different aspects of the rich culture of Georgia’s lively capital.The picturesque old Tiflis architecture, draped in the hills across the river Kura, is finely chiseled, and the Georgian capital has a vivid history dating back to the fifth century when the founding of the city by King Vakhtang I Gorgasali of Iberia was first recorded. Through the following centuries, many wars and invasions by Persians, Arabs, Mongols and Turks followed until the annexation by the Russian Empire in 1801.Located at the crossroads of East and West between the Caucasus Mountains and the Black Sea, the capital was renowned for its multi-ethnic groups living alongside the Georgian nobility, and for its rich culture, art, music and wines.Chapters on history, Architecture, Art, Music, Folklore; Literature and Photography give the reader a remarkable overview of the life and people of this radiant and bustling city.This 408 Page book is richly illustrated and contains a select bibliography for further reading.

To buy the book click here (link to Amazon)

To view the book download by clicking here (17MB)