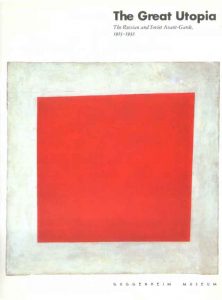 The Great Utopia was an exhibition which I initiated and was on view 1992/1993 in the Schirn Kunshalle Frankfurt, Stedeljik Museum, Amsterdam and finally at the Guggenheim Museum in New York where Zaha Zadid did the exhibition design. It later travelled to the Tretyakov Gallery in Moscow and the Russian Museum in St.Petersburg. It was one of the most comprehensive retrospective of Russian avant garde art 1915-1932 and the illustrated catalogue  includes 21 essays by the leading specialists of the subject.

The English Catalogue was published in 1992 by the Guggenheim Museum , New York, 732 pages.

To view the book download by clicking here (22MB) 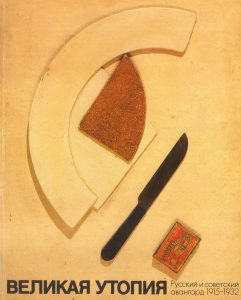 The Russian catalogue was puplished in the Bentelli Verlag, Bern , 1992, 832 pages

During the years 1915-32, Moscow and Petrograd (from 1924, Leningrad) witnessed revolutions in art and politics that changed the course of Modernist art and modern history. Though the great revolution in art – the radical formal innovations constituted by Vladimir Tatlins “material assemblages” and Kazimir Malevich’s Suprematism – in fact preceed the political revolution by several years, the full weight of the new expressive possibilities was felt only after, and to a large extent because of the social upheavals of February and October 1917. As avant-garde artists, armed with new insights into form and materials, sought to realize the utopian aims of the Bolshevik Revolution, art and life seemed to merge.
In this volume, which accompanies the largest exhibition ever mounted at the Guggenheim Museum, twenty-one essays by eminent scholars from Germany, Great Britain, Russia, and the United States explore the activity of the Russian and Soviet avant-garde in all its diversity and complexity. These essays trace the work of Malevich’s Unovis (Affirmers of the New Art) collective in Vitebsk, which introduced Suprematism’s all-encompassing geometries into the design of textiles, ceramics, and indeed whole environments; the postrevolutionary reform of art education and the creation of Moscow’s Vkhutemas (Higher Artistic-Technical Workshops), where the formal and analytical princples of the avant-garde were the basis of instruction; the debates over a “proletarian art” and the transition to Constructivism, “production art,” and the “artist-constructor”; the organization of new artist-administered “museums of artistic culture”; the “third path” in non-objective art taken by Mikhail Larionov; the return to figuration in the mid-1920s by the young artists – and former students of the avant-garde – in Ost (the Society of Easel Painters); the debates among photographers, in the late 1920s and early 1930s, on the superiority of the fragmented or continuous image as a representation of the new socialist reality; book, porcelain, fabric, and stage design; and the evolution of a new architecture, from the experimental projects of Zhivskul’ptarkh (the Synthesis of Painting, Sculpture, and Architecture Commission) to the multistage competition, in 1931-32, for the Palace of Soviets, which “proved” the inapplicability of a Modernist architecture to the Bolshevik Party’s aspirations.
More than seven hundred of the finest examples of Russian and Soviet avant-garde art are reproduced here in full color. Drawn from public and private collections worldwide – notably, from Baku, Kiev, Moscow, Riga, Samara, St. Petersburg, and Tashkent in the former Soviet Union – these works are by such masters as Natan Al’tman, Il’ia Chashnik, Aleksandra Ekster, Gustav Klutsis, El Lissitzky, Liubov’ Popova, Ol’ga Rozanova, Georgii and Vladimir Stenberg, and the Vesnin brothers.

To view the book download by clicking here (171MB)